Ginza is probably the most obvious place to begin one's Tokyo shopping adventures. I would describe it as Tokyo's Mayfair, and it's packed full of shops -- both high street and designer. A number of Japan's major department stores have branches in Ginza, and they are a convenient port at which to call when searching for high-end Japan-exclusive brands. They also stock the usual major international lines such as Chanel, Dior, YSL, etc., but I usually give these a wide berth because of the hefty mark-up on imported cosmetics.

Before I turn to some of the department stores, a few notes which I forgot to include in my introduction to this series:

Matsuya's Ginza store was established in 1925. There is another branch in Asakusa in Northern Tokyo near the famous Buddhist temple of Sensō-ji. 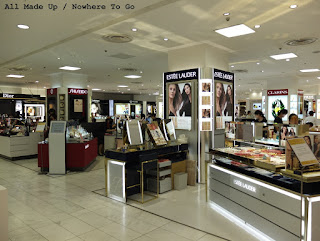 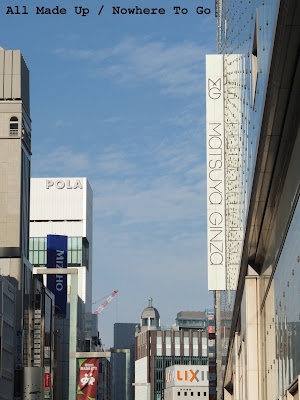 Matsuya Ginza has a large beauty department on the ground floor. As well as the obvious high-end Western brands (including Guerlain, Nars, Chantecaille and Sisley), Matsuya stocks Aesop, Origins, cle de peau, Kanebo, Helena Rubenstein, KOSE, est and more. Note that Matsuya does not carry Addiction, THREE, RMK or Suqqu, but it does have Lunasol which isn't stocked by Mitsukoshi.

I find Matsuya pleasant enough, but a little lacking in character; I tend not to visit unless looking for a brand not stocked by my preferred shops.

Also in the area (just down the road from Matsuya, over the main Ginza crossing) is Matsuzakaya, another department store which originates from Nagoya and dates back to 1611. Sadly, the Ginza branch doesn't have quite the same upmarket feel as Matsuya or Mitsukoshi and it feels a bit grubby and bedraggled inside. The main store is located in Ueno.

Opposite Matsuya and next to the Apple shop on Chūō-dōri is OPAQUE -- a rather charming boutique department store, with an interesting beauty section on the ground floor. The beauty department houses some harder to find (at least in Tokyo) brands including Kure BAZAAR, rahua, jane iredale and deborah lippmann. I really like this little store and appreciate the plethora of natural and organic brands it stocks. 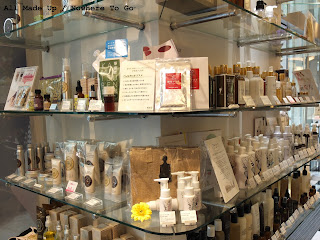 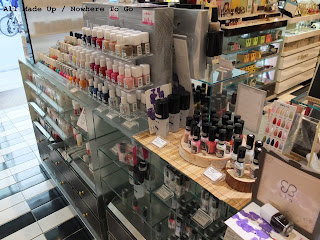 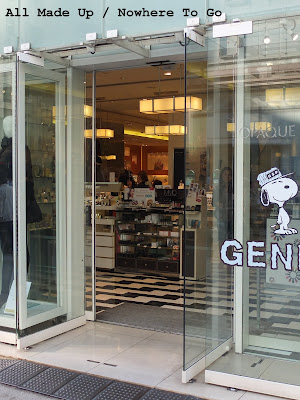 There is another OPAQUE boutique in nearby Marunouchi which, in keeping with its status as Tokyo's financial district, is home to a number of boutiques and high-end shops.

I've saved my favourite until last; Mitsukoshi Ginza is make-up shopping heaven on earth. Mitsukoshi, which was founded in 1673, is Tokyo's oldest department store. It is now owned by the same parent company as my other favourite department store, Isetan (which will feature in Part II of this post). Mitsukoshi is on the corner of the main Ginza crossing, and is easily accessed through Ginza station exit A11 (as well as one of the many above-ground entrances).

Mitsukoshi's beauty department is located in the basement (floor B1). On the floor below is the food hall, which is extremely impressive and very worth looking in on; I was quite overwhelmed the first time I entered! 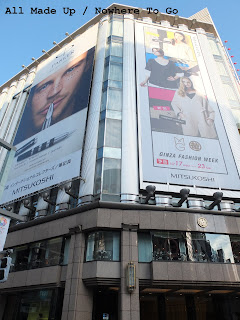 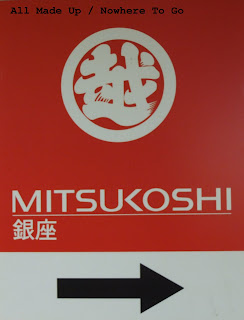 If you only visit one department store in Tokyo, then consider making it Mitsukoshi. It carries most brands that one might be looking for on a trip to Japan -- including Suqqu, Ladurée, Addiction, THREE, Anna Sui, Sonia Rykiel, Kanebo, RMK, Cosme De Corte, Shu Uemura, Shiseido and so on. I find the beauty hall to be very well laid out and designed. I love it in there and can spend lengthy periods exploring :). 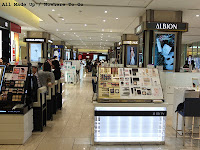 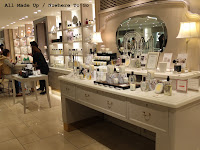 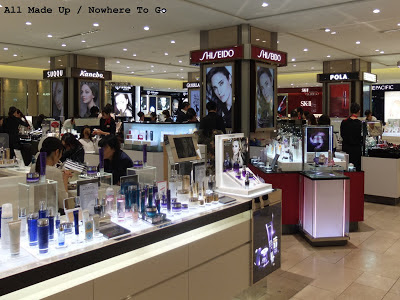 Just around the corner from the main beauty hall is an area housing a number of perfume brands (including Diptyque and Jo Malone). This leads into a little accessories section with decorated mirrors and other such knick-knacks, plus Mason Pearson hairbrushes and a Hakuhodo stand. There is only a limited range of Hakuhodo brushes available at this counter -- mostly travel sizes and some brushes from the S100 Vermilion range and the G and Basics series. I will be doing another post in this series on where to find Japanese brushes in Tokyo, including the full Hakuhodo range.

As far as I'm concerned, no trip to Mitsukoshi is complete without a visit to Minori Cafe on the 9th floor. They do sweet little soup and sandwich lunch sets, but I always head straight for the ice-cream :). 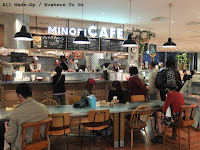 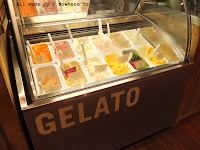 Japan is a make-up lover's paradise. I sort of feel that there is more excitement surrounding make-up here than in the UK (although I think this is probably changing with the likes of BeautyMART, Selfridges Beauty Workshop, John Lewis revamp, etc.). It somehow seems that is more publicly acceptable to enjoy make-up in Japan (see the comments section on online newspaper beauty articles for examples of how divisive the topic can be in the UK).

This is all just conjecture on my part really, but there's no denying that the make-up shopping to be had in Japan is fantastic. A number of highly sought-after lines are exclusively available in Japan (for example Addiction, THREE, Chikuhodo, etc.) and many Japanese drugstore products are of genuinely excellent quality. Walking around Tokyo I often feel that there's make-up to be bought everywhere, with cosmetics shops on every corner and in every station.

Over the next few weeks (or months, depending on how disciplined I am) I'll be writing a short series of posts on the places I like to shop in Japan -- obviously beginning with Tokyo because that's where I live, and extending to other locations as I visit them. To start with the Tokyo posts will cover some of the main department stores, high street and drugstore beauty retailers and brush shops. I'll link them in this post as I get around to publishing them. I also highly recommend checking out A Touch of Blusher's great Beauty City Shopping Guide series of posts, including one on Tokyo which I found really helpful when I first visited Japan.

To begin with, though, a few general notes on shopping for make-up in Japan. I find the beauty shopping 'experience' in Japan quite different to that in the UK. The service, particularly at department store counters, is generally much more attentive than in the UK (I also noted this in Hong Kong). Sometimes this can be a little overwhelming, but the SAs are usually happy to leave you to browse if you say you're just looking. I particularly like that at most counters the SAs are super quick to give you make-up remover and cotton wool if you swatch the products. I missed this when I went back to Selfridges a couple of months ago!

It is worth noting that shopping in Japan is not cheap (this applies across the board, not just to cosmetics). The Yen is strong at the moment so everything seems expensive when converted into Sterling (or USD). Many Western brands are also heavily marked up and can be quite prohibitively expensive (I'm looking at you Guerlain...). I tend to stick to Japanese brands as much as I can -- lines such as Addiction and Hakuhodo are comparatively quite reasonably priced, although I confess it is a little galling that Suqqu is more expensive here than in the UK. I also try to order Western brands online where possible as it's usually much cheaper to order from abroad.

On the topic of money, whenever you buy something in Japan the till will usually have a little tray for you to put your money or card in. This is probably obvious to most people but, being perennially unobservant, it took me quite a while to notice it :|. Speaking of politeness, I thought I would share one of my favourite things about living in Tokyo -- namely spotting manners posters in the Metro. 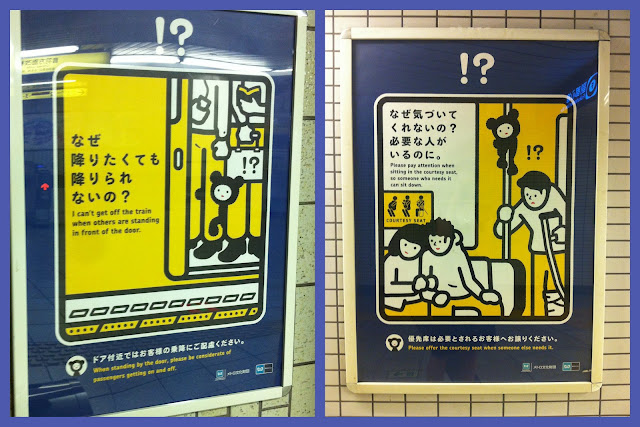 The manners campaign has been running since 1974. As of April 2008 the posters (which change monthly) have been designed by the graphic artist Bunpei Yorifuji. If you want to read more about it see here. This website also has pictures of the posters from the last couple of years.

Other posts in this series


As always, if you have any questions or requests please let me know :).
Posted by Rosy at 12:25 PM 6 comments: